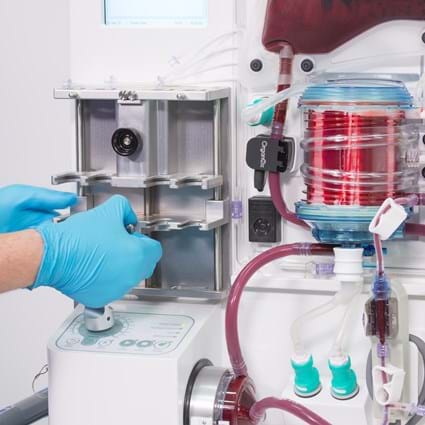 Resulting from cross-disciplinary biomedical engineering research at the University of Oxford’s Departments of Engineering Science and of Surgical Sciences, and funded by the NIHR and EU, the OrganOx metra is the world’s first normothermic (i.e. normal body temperature) organ preservation device used for improved and prolonged preservation and functional testing of livers prior to transplantation.

Led by Professors Constantin Coussios FREng and Peter Friend FMedSci, this device was developed over the course of 14 years of research and it is the first to enable preservation of an organ in a functioning state outside the body for periods of up to 24 hours clinically and up to 48 hours pre-clinically.

This makes it possible to (i) preserve organs for at least twice as long as conventional cold preservation techniques; (ii) assess the function of the graft during preservation before putting the recipient at risk; and (iii) safely use livers available within current donation practices that are currently perceived as being too risky for transplant, including fatty livers and organs from donors following circulatory death. It enables the safe utilisation of over 70% of livers which were until recently deemed unsuitable for transplant and makes it possible for hospitals to perform the majority of their transplants as a planned daytime procedure.

After commercialisation, the OrganOx metra is today deployed and routinely used in all seven UK liver transplant centres with impressive early results, seeing an increase in annual liver transplant numbers within current donation practice. In 2019 OrganOx won the Medtech Insight Award for “best Proof-of-Value of an Innovation”, recognising the benefits of its normothermic perfusion platform in increasing the utilisation of donated organs.